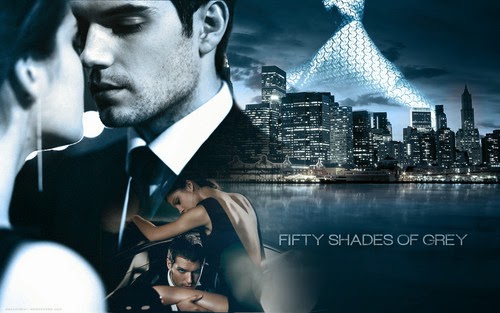 Of course it still did not convince me that I was missing anything, and I would have happily gone on with my life without reading the book but however, the movie trailer got my attention and so I began to think of reading the book in preparation for the movie debut on 14th February, 2015 which coincidentally happens to be Saint Valentine’s day. After all, there had to be something so compelling about it that it became the best selling, world phenomenon that it is today. And so over the course of a few days, I followed the journey of Anastasia Steele and Christian Grey, the two main characters of the book.

After reading the book, I came away with mixed feelings. Anger, boredom, and anticipation to be exact. I found Christian Grey to be an intoxicating character with enough mystery and grace to make me want to be like him.  I also found Anastasia’s internal posse that consisted of her inner goddess and intuition incarnate, to be annoying.

I didn’t seriously need to read about how her inner goddess took the lotus position every time Christian caved to her neediness, which in turn made her feel valued as a woman. But it was there every few pages. I also could have done away with the excessive sex scenes.

I hated the ending. They broke up. I still remember flipping those last few pages over in hopes that they would at least find a compromise between her unwillingness to submit to him fully, and his inability to get close to her. And what was the resolution?

They broke up. I’m still angry about it now and don’t even want to go on to read the rest of the series. Although, I have read over the internet about their reconciliation in the next two books.

All in all though, I can say that I see why the book was so big. It was taboo and dangled the promise of racy sex with a hot billionaire who was the ultimate gentleman in front of millions of women. How can that not sell? Do I think it was good though? Well, for me personally, the book had interesting moments, and then other moments felt like Twilight fan fiction. It was not horrible, it was not fantastic. I remember when the books first became a hit and they brought a lot of controversy. Well, it’s all returned now that the movie is coming, and I’ll be blunt when I say that the only thing more annoying than seeing trailers everywhere is seeing the ridiculous articles bashing it.

First off, I’m not judging anyone’s religion. I think people who have faith have a beautiful thing, and I wish everyone could have something to believe in and draw strength from. However, if I see one more article on how liking anything to do with the 50 Shades series makes you a bad Christian, I will flip. I know most of you have certain standards, but not all Christians think the same. Not all religious folk believe the same exact interpretation, and not everyone considers sins the same. So I’ll go with your arguments and defend them in my own right.

You have your ways, others have theirs. I personally don’t care what side you’re on. I think both are great for whomever! But why bash on people who look at sex differently than you? No one blames you for wanting to spend your life with one man or not have sex, or whatever. Life your life how you want to, and let others do the same if it’s not hurting you.

The Original piece is can be found at ThePrinceLive.com. I wrote it as a guest blogger on their website last year. Just felt like sharing it here too. I am so looking forward to the movie release on February 14th!